About Nepalgunj (My City) 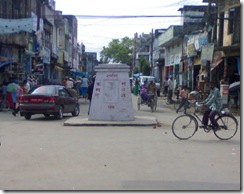 Nepalgunj (Nepali: नेपालगञ्ज or नेपालगन्ज [nepaːlɡəndʒ]), also spelled Nepalganj, is a municipality in Banke District, Nepal on the Terai plains near the southern border with Bahraich district, Uttar Pradesh state, India. It is 16 km south of Kohalpur and the east-west Mahendra Highway.

Nepalgunj is the administrative center of Banke District as well as Bheri Zone. It’s also the main transport hub for Nepal’s Mid-Western and Far-Western regions. The nearest Indian border crossing is about 8 km south and Bahraich city is about 55 km south.

Nepalgunj is an important business centre for at least 5 zones of Nepal: Bheri, Rapti, Mahakali, Karnali and Seti. Dhamboji is the main business district with banks, Faisal & Brothers Trading Company and Sandesh center liquors and canned foods. Nepalgunj is also developing into an IT center. At the same time it is a city of harmony and religious tolerance.

Birendra Chowk (Square) with a statue of the late King Birendra is in the town’s center.

The 2001 census [1] counted 57,535 inhabitants, with 20% growth since 1991. There is a large Madhesi community natively speaking mainly Hindi or its Awadhi variant. Nepali is spoken natively by Paharis who have moved down from the hills as well as by virtually everyone as the national language and lingua franca.

This tradition was badly disturbed by a riot in the last week of December 2006 causing violence between Madhesi people of ganga river\’ origin and nepal\’origin (people mainly from the hills). At least one person was killed and dozens injured. A mob destroyed the statue of late King Tribhuvan and attempted to rename the chowk (intersection) as Kamal Madheshi Chowk after a person killed in the violence. The local administration had to impose a curfew and later formed a commission to investigate the causes of the riot.

Nepal-India border at Rupaidiha near Nepalgunj. 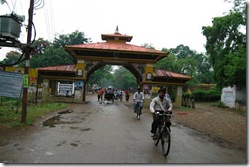 The climate is sub-tropical. Temperatures sometimes exceed 40°C (104°F) from April to June. During the rainy season—arriving in June and lasting into September—it is less hot but sometimes very humid. Winter is usually pleasant while the sun is out. It sometimes is foggy and overcast; then it can be chilly with temperatures below 10°C (41°F) but no frost.